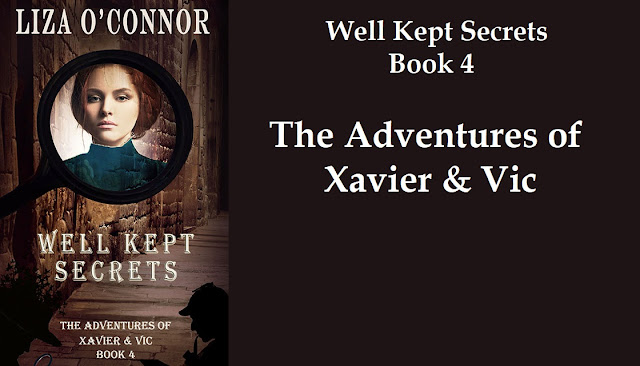 THE ADVENTURES OF
XAVIER & VIC
BOOK 4

Well Kept Secrets
By
Liza O’Connor
∞
Cases to be solved: 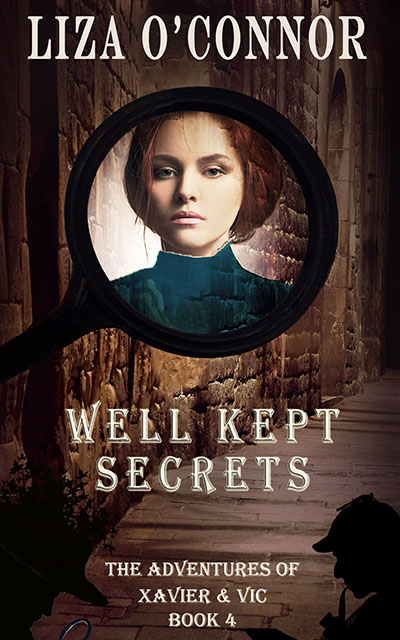 
The great Victorian sleuth Xavier Thorn and his partner Vic Hamilton take a case close to home. Their youngest staff member, L’il Pete, discovers his mother murdered in the alley. Jacko is called up from the country to assist in solving the crime. The good woman’s murder proves to be tangled up with a much larger and shocking list of crimes perpetrated by a powerful man who may truly be above the law. Making matters more complex: Vic discovers her recent weight gain may be the result of a condition that could destroy her life and everything she loves.

Excerpt
“No!” Pete yelled. “I have to help find me mum’s murderer.”

“No, you have to find the charming young man you once were. Vic and I will find the murderer.” He leaned forward. “This isn’t to punish you, Pete. I’m trying to save you from a bad blow. Vic lost both his parents in one blow.”

“And I was very angry,” Vic added.

“And Gregory turned him into a fine young man.
The best I’ve ever met.”

“I wouldn’t have made it without his firm but loving guidance,” Vic added.

Pete sniffed and stared at her. “How long do I have to stay?”

“Until the anger is gone. That probably won’t happen until after we find the murderer.”

Pete nodded and stared out the window. “What if I don’t like it there?”

“Then step outside and recall the temperature.
There are worse things than bossy people who wish to make you into a better person. Freezing to death is a painful way to die.”

Pete grimaced. “I’ll do my best not to get thrown out.”

“Then you’ll succeed,” Vic assured him.

When they arrived and Gregory let them inside without a scold or lecture, Vic felt like it was sign from above. “Gregory, this is Pete. He lost his mum this morning and has no one but us to grow him into a fine young man. Xavier has decided since you did such a fine job helping me get rid of all my anger when my parents died, that you can do the same with Pete.”

“And what will you be doing in the meantime?” Gregory demanded.

“Finding the man who killed Maggie,” Vic replied. God! Why couldn’t she have a butler that just did as he was told?

“Excellent!” He then eyed Pete. “How old are you?”

“Nine,” Pete muttered as he stared at the front door as if contemplating an escape.

“I’m not lying. I am nine. I’m just small because me mum didn’t have much food to eat when she made me up in her tummy.”

“I see,” his voice softened. “Well, with proper food, we will try to ameliorate that situation.”

Pete frowned and looked at Vic. “I don’t understand half what he says. How’s this gonna work?”

Vic knelt down and hugged the boy. “You’ll tell Gregory when he says something you don’t understand and he’ll keep talking until you do.”

Pete turned back to Gregory. “Is that true?”

With his fingers squeezing the bridge of his nose,
Gregory managed to reply, “Yes.”