Bk 1: THE ADVENTURES OF XAVIER & VIC, A VICTORIAN SLEUTH SERIES by Liza O'Connor

The Adventures of
Xavier & Vic
–
Book 1
The Troublesome Apprentice
By Liza O’Connor
∞
Cases to be Resolved:
The Key to Aunt Maddy’s Death
The Missing Husband of Mrs. Wimple
The Disappearing Scarlet Nun
The Clever Butcher’s Wife
The Rescue of Lady Anne 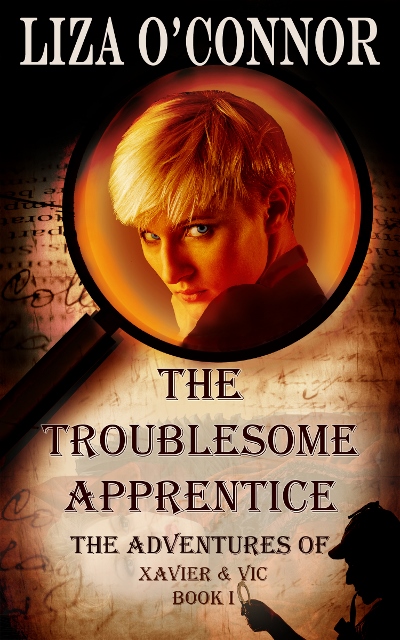 BLURB
While investigating the death of a friend and client, Maddy Hamilton, Xavier Thorn (reputed to be the greatest sleuth in England) is greatly impressed with Maddy’s nephew, Victor, and offers him a job as his secretary. Aware of Xavier’s history of firing secretaries, Victor garners a promise that for three months he cannot be fired. Vic then proceeds, in Xavier’s view, to be cheeky and impertinent at every turn. Xavier endures the impudent pup because Victor is most skilled in extracting the truth from clients and intuiting facts with little evidence to assist.
As they solve a string of cases, Xavier discovers a few more important details about his troublesome apprentice, such as her true gender, and the realization that she has awakened his long dormant heart.

EXCERPT
Xavier held his pen, poised to write a second note. Perhaps he should retrieve Victor in person. No, he must wait. The young man would come or he would not.

Since returning to his office, he had spent considerable thought on his feelings towards Victor. The combination of the boy’s brilliant young mind with Maddy’s eyes and character had brought his stone-dead passion to life. He had never experienced such intense sexual stirrings before, and certainly never for a young man.

This sudden hardening of his manhood at the mere thought of the fellow was most distracting, and frankly unwanted, at least on his part. What Victor thought or wanted, he had no idea. However, since the young man refused to come to work, even when summoned, Xavier surmised he had not been comfortable with the length of time he’d been held last night.

Xavier cursed and threw his inkwell at the door. Unfortunately, the door opened at the same exact moment and the glass bottle slammed into Victor’s stomach, covering him in India ink.

“Damn it, Victor, knock before you enter,” Xavier cursed as he rose and approached the boy. “You are covered with ink,” he complained.

The fault is entirely yours, but we will make no more of it. Just remember to knock in the future.”

“I daresay I’ll not forget for a very long time,” Victor growled.

“Excellent attitude,” Xavier declared with excessive cheeriness. He ceased smiling as the young man continued to glare at him. “I hope you have not come to hand me your resignation because I will not take it. You have committed to remain three months, and I will hold you to it. And why are you so damnably late today?”

“Because I was sleeping and Gregory did not give me your note until I woke a half hour ago.”

“A fine excuse if masters customarily wrote notes ordering their people to work and, without such a note, the people were not meant to come.”

“Given last night, it had not occurred to me…never mind. You are right, I am completely in the wrong, and I apologize. I will be here at the crack of dawn each morning.”

Xavier relaxed. “Good enough.” He returned to his desk. “About the embrace last night…it was a one-time event.” He watched Vic’s expression and thought he caught a moment of regret before acceptance and relief took over.

Victor nodded. “I understand. You showed me a moment of kindness and I show up eight hours late for work. However, surely throwing an inkwell at me and ruining my best suit somewhat balances matters.”

“I did not throw the inkwell at you, but I am in agreement all should be forgotten and we will proceed from here. First of all, you need clean clothes. I doubt my clothes will fit you.”

The boy gave Xavier’s lean but muscular body a quick study, blushed, and agreed they would not.

The tightening of his loins caused by Vic’s perusal of his person unsettled him. “Well, you cannot remain as you are. You will make a mess as you dig your way through a mountain of paperwork. Go to the kitchen and find something to solve your problem. I expect you back here in ten minutes, ready to work, not a second later.”

I’m tired of telling my proper bio. So you get the improper bio.

Liza O’Connor was raised by feral cats, which explains a great deal, such as why she has no manners, is always getting in trouble, and doesn’t behave like a proper author and give you a proper bio.
She is highly unpredictable, both in real life and her stories, and presently is writing humorous romances.

Please buy these books, because otherwise, she’ll become grumpy and write troubled novels instead. They will likely traumatize you.