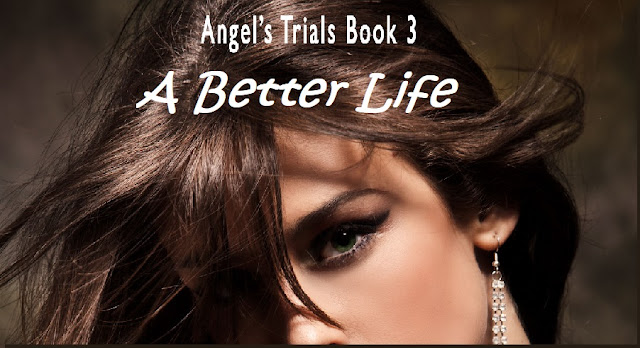 A Better Life
By Liza O’Connor 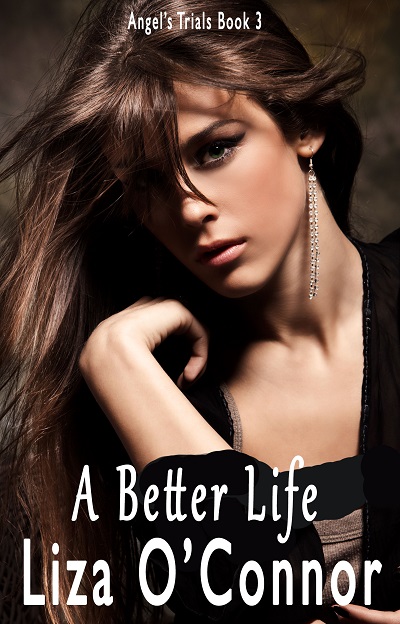 Blurb
Angel’s husband had barely left the country when the first attempt on her life occurred. Fortunately, Anna was at home and shot the man as he entered through a window that for some reason had been left open. Now a dead body chilled in the basement freezer.
Angel had always known this day would come. She had lived in fear of this day for the last five years. The terrorists had somehow discovered her identity. By the sounds of gunshots outside the house, she knew her nightmare was far from over. Any thought of her living a normal life from here-on wasn’t possible. God only knows what would happen to her and her children now.
Discover the new life of the extraordinary forensic auditor named Angel. She can locate improperly acquired money better than anyone. Unfortunately, that puts her and her children at serious risk.
Nor does her love life work nearly as well as her forensic abilities. Men are constantly using, then betraying her. Still, she remains positive and optimistic. Now that she is officially dead, living deep within a mountain, she hopes she and her children will be safe.
To her surprise, the biggest threat is not from criminals, but her husband, who has ordered her to be killed.

“Please God, keep my children safe,” she whispered beneath her breath. Her three young sons, ages eight, five, and one year old, were at Derrick’s house, next door, the older two playing with his kids. Hopefully, at the first sound of trouble, the former FBI agent had gotten them to the safe room hidden beneath the house she had built for him.

She could accept her death, but not that of her innocent children.

Anna, a young woman of twenty-five, whom she loved like a sister, and Sahid, a new guest, whom she barely knew at all, were struggling before the front door.

Sahid held onto her. “No! They will kill you! You must stay here!” He slung her away from the door, slammed it shut, and bolted it.

A moment later, someone pounded on the outside. “Help! We need help!”

Anna fought with Sahid, determined to go to Pete. Angel’s heart went out to her. After four years of not speaking to her ex-fiancé, Anna had recently fallen back in love with Pete.

Before she could unbolt the door, a rapid burst of gunfire erupted, and the bullets pounded against the outside of the door. Any normal door would have disintegrated into wood chips, and Anna would be dead now. However, Angel’s husband Max had upgraded her house right after they married. Her door was two-inch steel and the windows bulletproof.

They both had known someday this nightmare would occur and Max had done all he could to ensure she would survive it.

Unable to shoot their way in, the attackers shoved Pete, Anna’s former fiancé, against the window. His chest was covered in blood, his face contorted in pain.

Anna ran to the window and pressed her hands against the bulletproof glass. “Don’t hurt him,” she pleaded. “Please, tell me what you want. We can negotiate.”

The man rammed a gun against Pete’s head. “Open the door or he dies!”

She looked at Pete, her face against the glass. “I love you!” she cried out. “Don’t die on me, Pete, please…don't die.”

“Open the door!” The man demanded.

Tears streaked down her face. “I can’t. The house is now in lockdown. Please, help him. I am willing to negotiate.”

The man pulled the trigger, and Pete’s brains splattered across the window pane.

Anna screamed, and Angel turned away, sick to her stomach. She had known one day she would die, but why Pete? Why Anna? And Sahid… he was just a temporary guest needing a place to stay.

Anna, amazingly strong just like her father, rebounded from her pain and focused on their imminent danger. “Take Angel to the basement,” she ordered Sahid.

“No, we should remain here together,” the man said.

Angel stared at Sahid. Why would he think he had any say at all? He was only an interpreter for the FBI. Anna had spent her life with some of the best FBI agents there were. And while she failed to graduate from the FBI academy due to a foolish prank, Angel never doubted her competence.

But Sahid was a Mid-Eastern man, so he would never think a woman could be competent.

About the Author
Liza O’Connor
Liza O’Connor lives in Denville, NJ with her dog Jess. They hike in fabulous woods every day, rain or shine, sleet or snow. Having an adventurous nature, she learned to fly small Cessnas in NJ, hang-glide in New Zealand, kayak in Pennsylvania, ski in New York, scuba dive with great white sharks in Australia, dig up dinosaur bones in Montana, sky dive in Indiana, and raft a class four river in Tasmania. She’s an avid gardener, amateur photographer, and dabbler in watercolors and graphic arts. Yet through her entire life, her first love has and always will be writing novels.

FOR MORE INFORMATION ABOUT
LIZA O'CONNOR
Investigate these sites:
Liza’s Multiverse Blog
Liza's Blog and Website   Facebook   Twitter
All the Many Books Liza has written
Over 50 books for your reading pleasure
Contemporary
Historical
Paranormal
Sci-Fi
***
Romance
Sleuths
Suspense
Humor
Feel Good Novels
***
Books range from young adult to mature audiences.
I write them as my characters want them to be written.