Dame Audrey, A Medieval Romance with a Touch of Fantasy 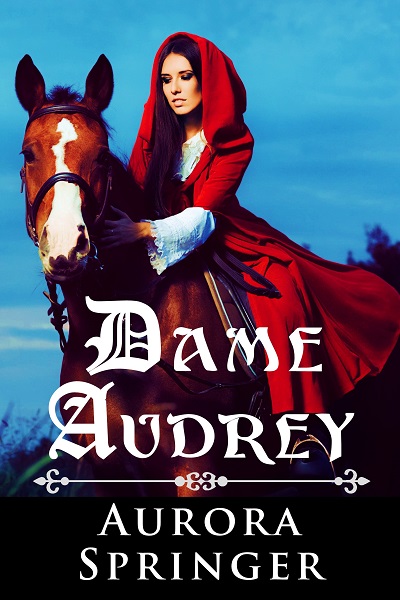 In fourteenth century Britain, Dame Audrey cherishes her independence as the widow of a wealthy cloth merchant. But some of the wealthier traders covet her profitable business and she fears they will invoke the Abbot’s authority to compel her to marry a man of their choice. Her worst nightmare is suffering under a cruel husband like the hateful jeweler, Henry Goldsmith, who has threatened to curb her lively spirits.

Audrey joins a pilgrimage to Glastonbury to pray for guidance. The holy relics give her no inspiration nor do her fellow travelers. On the homeward journey, she aids the dying victim of a brutal robbery. She wins the stranger’s blessing and a gold brooch with a green dragon. Back in her hometown, the faerie brooch attracts trouble from thieves of all ranks and the attentions of a handsome yeoman, Selwyn Drake. As her nightmare looms nearer, she grows desperate to preserve her freedom.

Can the magic brooch help Audrey evade the schemes to force her into wedlock or must she submit to a husband’s will?

Steadied by my stout stick, I hurried through the wet streets with my hood of my cloak lowered to hide my face. Lagging behind, Alfred splashed through the puddles. Many shops were closed and barred. Why should they stay open? Few customers would venture out in this gloomy weather.

Many shops were closed and barred. Why should they stay open? Few customers would venture out in this gloomy weather.

Shivering, I hastened homeward, eager to reach my house before the next storm hit. A rat fled across the street, nearly tripping me. Only my staff saved me from tumbling into the stream of slimy water in the gutter. Quenching my fears, I kept to the center of the street, avoiding the dark and grimy passages where thieves lurked. As I passed a narrow alley, raucous jeers came from the alehouse and spurred me into a faster pace.

A slatternly woman darted in front of me, crying, “Help me, Sir! He’s stolen my purse.” The smell of stale ale clung to her breath and low-cut kirtle. An alewife or worse, her nose and cheeks were near as red as her dress.

Perplexed for a moment, I halted. Despite my height, I’m not usually mistaken for a man. Did the buxom young woman imagine my brown cloak covered a friar’s habit?

A horse snorted further along the street.

Cued by the squelch of footsteps in the mud behind me, I whirled around, gripping my staff in both hands. A hooded man with a dagger lunged at me. Acting swiftly, I smacked the stick onto his wrist. The knife dropped from his fist.

Spitting a vulgar oath, he jerked aside.

On the backstroke, more by fortune than foresight, I clouted his head with my staff.

My attacker splashed into the filthy drainage channel, cursing like a maniac. Before he had time to recover, young Alfred dashed up and grabbed his arms. Alfie might be skinny, yet he is strong for his age. He wrestled the churl’s hands behind his back.

A tall man ran out of the shadows toward us, a sword in his hand. He blew a whistle. Wearing a horseman’s short cloak and boots, his lips were a grim line beneath his green hood, and he meant to intervene.

Gripping my staff, I stood my ground. Before I could decide whether the newcomer favored me or my attacker, the clatter of booted feet heralded two more armed men. They raced onto the street, and slowed by the first man.

He pointed his sword tip at the villain I’d felled and snapped an order, “Restrain the churl.”

Alfred stepped away as the yeomen obeyed their instructions.

The leader sheathed his sword. Instead of ogling the buxom strumpet, he focused on me, his gaze lingering on my face. My hood had fallen back to reveal my wimpled face and he could have no doubt about my sex or widowhood.

Doffing his hood and exposing his short auburn hair, he cried, “A cunning thrust, lady.”

With a shiver of excitement, I recognized the leader of the sheriff’s men who had overtaken my company on the road to Redding. He was tall, which I preferred in a man due to my own height. Even standing on my pattens, I had to raise my gaze to meet his eyes.

His deep-set hazel eyes held glints of green. They widened a fraction and his lips curled in a slight smile of appreciation. “I’ve seen your face before.”

“You rode by me on the road from Newbury.”

“Aye, I remember. You had a frisky grey mare and a large hound.”

His swift smile and the warmth of his tone set my heart fluttering. I felt my cheeks flush as if I were a maid of fourteen instead of a widow of twenty-three. Overcoming my embarrassment, I asked, “Are you the sheriff’s messenger?”

“Nay. I’m Lord William’s bailiff. He appointed me to keep peace during the fair.” He lifted the edge of his cloak to show the sheriff’s badge sewn on his doublet. “Selwyn Drake, at your service. Are you in town for the Fair?”

“I run a stall, Sir.” I firmed my chin, smiled and dropped a curtsy. “Audrey Thyme, merchant’s widow and trader in cloth.”

About the Author
Aurora Springer is a scientist morphing into a novelist. She has a PhD in molecular biophysics and discovers science facts in her day job. Aurora has invented adventures in weird worlds for as long as she can remember. In 2014, she achieved her life-long ambition to publish her stories. Her works are character-driven adventures and romances set in weird worlds and sprinkled with humor. She was born in the UK and lives in Atlanta with her husband and adopted pets - two dogs and two cats. Her hobbies, besides reading and writing, include outdoor activities like gardening, watching wildlife, hiking and canoeing.

This novel is very different from Aurora Springer’s normal fare. First of all, it is a love story from the Medieval Era.

To be honest, I struggled a bit with the pace in chapter one. Note: Aurora Springer puts incredible detail in her books and in this case, I didn’t know what several items, such as a kirtle, was. But a few pages in and I was enchanted.

This is a beautiful love story in a time (Medieval era) when many women were not normally treated too well by their husbands. A time when death by birthing a child, or by being beaten by a husband was all too common. Thus, men often lost their current wife and took another with no love involved. Young women were just chattel to be sold and used.

The heroine, Dame Audrey, is a widow of two years. To be honest, she has no desire to be remarried to another man. Instead, she has worked hard to create beautiful fabrics to sell in the market. She had no need of a man...at least until a man of honor, who comes to her rescue shows up.

While her life seems to be tolerable at first, a piece of jewelry changes everything and quickly sends her life is into constant danger.

I highly recommend that you read this book, even if it is the first medieval book that you have ever read. Trust me, you won’t regret it.