Climbing out of Hell by Liza0Connor 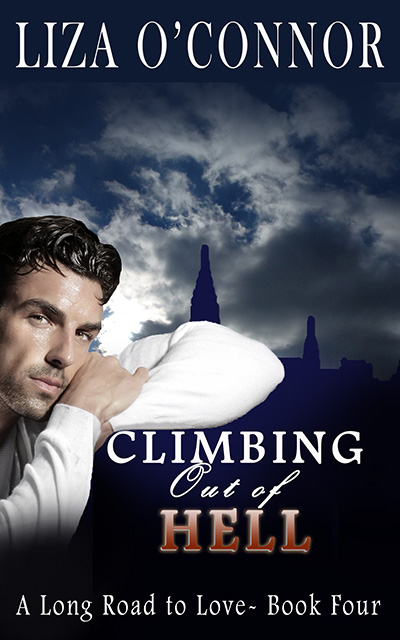 Billionaire Trent Lancaster has destroyed his relationship with the only woman who ever loved him. Now we discover the full truth of what happened.
He actually had reasons for his behaviors.
Still, there is no going back. Trent has lost Carrie forever, but he would rather die than marry Coco, so he does just that. Trent gives away most of his possessions, fakes his death, and starts over with a new face and a better attitude in a small town in Iowa where his half-brother Sam is sheriff.
Losing his true love has fundamentally broken Trent to his core. His only chance for happiness is to become the better man Carrie had always seen inside him.
True change is not easy. Can Trent grow up and become a man we can love?

“Stop it! Get off of me!” Carrie screamed.
Trent couldn’t lose the only woman who had ever loved him. He covered her protest with his mouth, certain if they made love, everything would right itself.
As he fumbled with the zipper of her pants, the limo jerked to the right and came to a halt. Seconds later, someone yanked him out and slung him to the sidewalk. He stared up at his half-brother storming around the car, returning to the driver’s seat.
Tires squealed as the car pulled out in traffic. Once the vehicle disappeared from sight, Trent focused on himself. His right knee seared with pain and his head throbbed from slamming against the concrete. He sat up, so people would stop walking over him. New York City pedestrians were like marching ants. They stopped for nothing.
He stared at the four lanes of bumper-to-bumper honking traffic.
Carrie and his limo were gone.

Along with everything good in his world.
For one glorious month, life had been perfection. Well, he’d thought the first week was hell, but compared to his life now, it had been Nirvana.
He’d lost Carrie forever, broken a love he’d thought impervious to damage. Due to a stupid error he’d made months before, a cascade of problems had rained upon him. Trying his hardest, he still failed to protect her from the blow back.
Tears streamed down his cheeks for all to see. Normally, he’d be horrified to allow common people to gawk at him, but his self-respect and pride had been stripped away when Sam had to pull him from his limo to save Carrie.
From him.
He’d almost raped her—the only woman he had ever wanted. He thought if they made love, she would forgive everything he’d done. But he had broken the unbreakable and she wanted nothing more to do with him.
He buried his face in his hands and sobbed, knowing there was no way back to his month of happiness. Everything good in his life was gone.
A gentle hand touched his shoulder. His heart leaped in joy. Carrie had returned and forgiven him. But, no. He stared up at an old man in black—a priest—studying him with concern. “Are you ill? Do you need help?”
He opened his mouth, intending to declare himself beyond help, but stopped. Maybe the man could be of assistance. “I think I need an exorcism.”

Links
Book Four of the series:
A Long Road to Love
Climbing out of Hell

D2D
It provides books to many book stores.
or
Amazon
“Easily, the best of the series!”

Other books in the A Long Road to Love series
Book One
Worst Week Ever
“Love this book and couldn't stop laughing from beginning to end.” 5 stars – Alves - Amazon

Book Two
Oh Stupid Heart
“Be warned though, this book is completely different from The Worst Week Ever. Yes, there is still humor, dry wit, situations that you would think...NOT AGAIN but this one humanizes Trent more.” 5 stars - Brian’s Mom – Amazon

Book Three
Coming to Reason
Once again, Ms. O’Connor has written a brilliant book about the complexities of relationships, good and bad. Again, to me, the book is the best break up book EVER and it left my heart singing in the end. Best.Book.Ever…

Liza O’Connor
Author Bio:
Liza lives in Denville, NJ with her dog Jess. They hike in fabulous woods every day, rain or shine, sleet or snow. Having an adventurous nature, she learned to fly small Cessnas in NJ, hang-glide in New Zealand, kayak in Pennsylvania, ski in New York, scuba dive with great white sharks in Australia, dig up dinosaur bones in Montana, sky dive in Indiana, and raft a class four river in Tasmania. She’s an avid gardener, amateur photographer, and dabbler in watercolors and graphic arts. Yet through her entire life, her first love has and always will be writing novels. She loves to create interesting characters, set them loose, and scribe what happens.

Email ThisBlogThis!Share to TwitterShare to FacebookShare to Pinterest
Labels: A Long Road to Love, Book 4 of series, Climbing Out of Hell