The Dazzle of Innocence by Liza 0'Connor

The Dazzle of Innocence
by
Liza O’Connor

David Santiago has no interest in acquiring a wife. He came to England in a desperate attempt to save his sisters from being sold into white slavery.
Meriden Ford is searching for an interesting, educated, young husband who will recognize her superiority and become her decoy, while she runs the family fortune.
At their very first dance, they promise not to fall in love. However, their mutual admiration ensures a strong friendship. When bombarded with tribulations that would destroy most people, they survive by pulling strength from each other. Yet even as they realize their true feelings, others work to tear them apart forever.

A Victorian Romance thriller bringing the characters of A Tangled Affair and the Xavier Thorn series together for a delightful, nail-biting tale. A definite read! 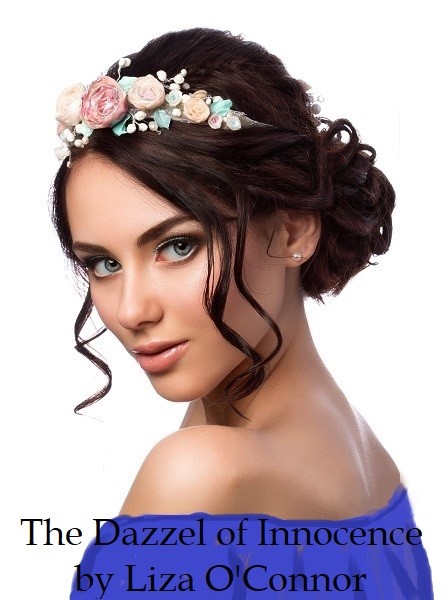 EXCERPT
“Allow me to introduce you to the best student I ever encountered during my years at Cambridge. So much so, I have kept him as a dear friend since he graduated.”


While David had not expected the same greeting his friend had received, the chilly glare he received took him by surprise. His extended hand was ignored by Garrison, and Sara went so far as to turn away and speak to the woman beside Samuel Hawkens.

Jonas stepped in, trying to soften the tension in the air. “You might recall my mentioning the boy that I took home for a summer and gave him leave to enjoy my library.”

Oddly, it was Samuel Hawkens who replied. “I’ve heard that story second hand from Garrison. Not only did he read every book you owned, but he categorized and evaluated them, placing the most interesting, close at hand, if you ever got time to read them yourself.”

Jonas chuckled. “And once I retired, I discovered what a damn fine job he did.”
While Mr. Ford and his wife continued their chilly reception, Samuel took special effort to bring David into the conversation with him and his wife. Samuel somehow knew he had just come from Spain. Was it possible he had made inquiries after receiving David’s request for a visit?

Mr. Hawkens questioned him on the political upheaval in his homeland. He answered as honestly and openly as possible, including the ladies in the conversation as Jonas had advised. He was in the midst of supporting the reason he thought King Amadeus would abdicate his throne when Mrs. Ford’s hand gripped her husband’s hand. “Where is Meri? I cannot see her!” Fear contorted her lovely features.

Everyone’s eyes, including David’s, searched the dance floor. Upon seeing the girl, David’s focus returned to the excessively nervous mother.

Mr. Ford stroked his wife’s back and pulled her closer to him, kissing her temple. “I have my eye on her.” His eyes betrayed an unfashionable degree of love and affection for his wife. “Perhaps I should acquire you a chair so you may see over the heads of the crowd.” He then did the most shocking thing: he kissed her on her downturned lips.

“She is fine. The Queen could not have better protection. The boys have refused all suitors as of yet. At this rate, she’ll be unmarried and underfoot even in our dotage.” He chuckled, as if the idea pleased him.

Sara blushed and looked at David. “You must think us absurdly protective.”
David paused. In fact, he did think just that. However, his need of Samuel Hawken’s help to save his sisters required him to respond to her question with prudence. “While your daughter is clearly a cut above most young ladies, she must be quite extraordinary to claim such protectiveness from not only her mother, but from all who know and love her.”

“She is extraordinary,” Mrs. Ford assured him. “And I worry. This is the first time she has been introduced into society.”

David focused on their daughter, dancing with her cousin. He wondered why they felt the young lady’s introduction to society warranted greater concern than any other debutantes. God, if his problems were only this ridiculous.


As he watched the young lady in question glide about in an elegant waltz with one of her brothers, he had to concede there was nothing ‘ordinary’ about the girl. The other young ladies seemed stiff and self-conscious in comparison. While Miss Ford danced beautifully, she did so with little apparent attention to her steps. Her main focus appeared to be arguing with her brother, and by his pained expression, she was winning the battle. He suspected that she was warning him to stop scaring off her suitors.


“Well, she is doing most spectacularly. I’ve never seen a better waltz” Or arguer for that matter. He appreciated that she refused to accept what others wished to impose upon her. He only wished his mother and sisters had a touch of her fight within them. Then perhaps they would not be in their current danger.

David refocused on Mrs. Ford and smiled. “However, her brothers and cousin are going to eventually have to let her dance with some gentlemen or the poor girl will wonder why she had bothered to come to London.”
He hoped they would offer him the honor of dancing with their daughter, but his subtle suggestion was ignored in chilly silence.

Available at the following sites:
Barns & Noble, Hoopla, Kobo, Overdrive, Apple, Baker & Taylor, Scribd, Tolino, 245
Chose any of the above and click on this

Email ThisBlogThis!Share to TwitterShare to FacebookShare to Pinterest
Labels: @Liza0Connor, Historical Romance, The Dazzle of Innocence